Film making in some countries if not most are of male dominance in every film discipline worse is the producing , directing and lighting no saying there are female in this disciplines. In Cameroon it’s understood that the film making sector is gaining grounds meaning it’s still growing at a very promising rate, women will be scarce in the discipline.
Fast forward to few years back that powerful women have pick men roles and are challenging some man and making waves in producing in  the likes of SYNDY EADE, STAPHANIE TUM, EFUNGFEGE EVITA, ERMELINDE SIMO,SAKAH ANTOINE and a few others. They have managed to make a name for themselves producing some of the best films in Cameroon which has hit the world and internal festival platforms talk less of being a talking point in Cameroon. Every year the Cameroon film festival create workshops in filmmaking and invite some of them to come share experience and educate the younger film makes why not empower them.

A film producer from Cameroon, actress and business woman. She is the owner of blue rain entertainment which is a production company base in Cameroon with services as carrying out film making projects, event video coverage and professional photo shoots. She has produced one of a prominent Cameroon film which drew the attention of NETFLIX, the man of the weekend , and Broken . 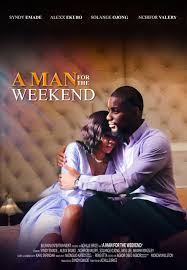 A Cameroon film producer who did SAVING MBANGO a movie which at post production; marketing phase to be precise was sponsored by ORANGE CAMEROON for the film to be screened around the regions of Cameroon. A contemporary epic movie; She is also the founder of Emi glow an organic products that clears the skin and make it glow.

AFUNGFEGE EVITA
She produced IN 72HOURS a movie which talked about the effects of war to the citizens of Cameroon. This movie was premiered in Bamenda and has appeared on international festivals. She is a home base name and very flexible and she is the youngest female Cameroon film producer. She is also a business woman , the founder of NGOEMA PR which is a public relations and an event management agency based in Cameroon.

SAKAH ANTOINE AND ERMELINDE SIMO
Cameroon producers who produced THERAPY, a Cameroon film which is currently on NETFLIX.

These women don’t seem to be slowing down as they work very hard to set the filmmaking sector rolling and booming. In these women, are found aspects of empowering other women in the business and they do so by organizing competitions and workshops for them so that they can be more women the business. The industry is welcome to women now and the number of women are gradually increasing.