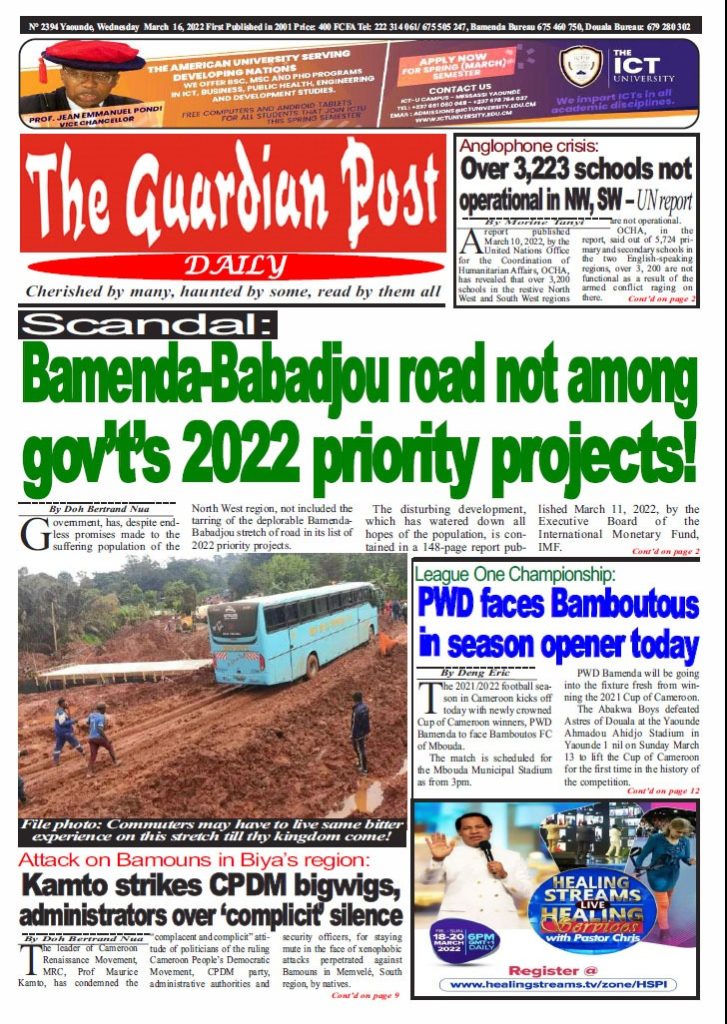 In June of 2021, the government of CAMEROON through the Ministry of Economic Planning and Regional Development MINEPAT, came up with a Three year plan, the Priority Investment Plan (PIP).

This project is defined Priority because the national scope of the project and it’s impact on the achievement of the objectives set at the national Development strategy (NDS30). All projects earmarked here are of priority and must be completed by the year 2024.

The PIP is structured to cover several ministries as project owners and the Ministry of Public Works (MINTP) will own most projects. This projects are either ongoing or still to start within 2021 and 2021. As at the time of publication of this document, ongoing projects are earmarked, start dates stated and budget for the projects to be completed stated as well.

Bamenda-Babajou project is ongoing and falls with the 2021 -2024 plan. Though it has been a nightmare as far back as 2014 till day, it’s cost stands at XAF121billion, covering just 52km and it is a MINTP project.

Hopefully by 2024, since it is an ongoing projects from way back and according to the PIP plan, all projects that fall within this frame work must be completed on or before the said year, 2024. Thus, no matter how hard the situation will be by 2024 December, Bamenda Babadjou stretch of road would be complete.

The Bamenda Babadjou road just like every other PIP is hoped the government will be able to reap off benefits within the shortest time possible. The economy will be improved and the growth level will be improved. The government has invested so much money into this projects. Billions of XAF are invested with the hope that profits on investment will be reinvested back into other priority areas.

Millions are lost on a weekly and billions have lost in CFA particular at the Bamenda Babadjou stretch of road given that for over 5years, now nothing has filtered into the state coffers from the toll gate collection.

It is worth nothing at the wake of the ongoing anglophone crisis, the most popular political figure in the Northwest Region, opposition leader, Ni John Fru Ndu had personally stopped toll fee collectors from doing their job in a road with such a bad State. He argued that the money from toll gate collection should first be used for road maintenance before anything Else.