Menkemndi Randy is no new name in the entertainment sphere in Cameroon. He is a movie maker, actor producer and Director with just so much to his name. He is a graduate of the University of Bamenda with a Bachelor in Business Administration (BBA) in Management and Entrepreneurship and also a YALI alumni among several things. he is also the founder of Noble Arts Entertainment Company, (NAEC).

Growing up as a Christian, Menkemndi had a God father who stood by him to implant a dream of acting and nursed interest in film making. His God father was the drama coordinator of their church and gave him the opportunity to act in Sunday school plays during rallies. “I remember my first ever role was that of a palace guard of the famous king David in the bible. I said nothing and stood behind the king till the end of the drama [laughs].” He continued to narrate the won and he got the motivation and zeal to keep up. “…We emerged second in that rally and I was very fulfilled to have acted my best”. He also has as a push factor, the passing on to glory of his friend whom they shared the stage at some point. “……….the zeal grew and became even stronger when a childhood friend of mine whom I used to act with died in the red sea trying to enter Europe illegally. This served as a strong source of strength to build on with his dream of an industry where people earn a living from their talents” he wrote

Projects Menkemndi Has Completed So Far.

He has directed and produced over 25 short films, 3 feature films, shot over 5 documentaries in Cameroon and Germany,
Menkemndi has directed over 8 music videos one in Germany and the rest in Cameroon. He has together with NAEC represented Cameroon in international film festivals like AFRIFF, RTF and CAMIFF Just to name a few. Menkemndi is the founder of the Almost A Night AwardsAlmost A Night Awards which he’s directed and produced the 4 editions giving over 75 awards. 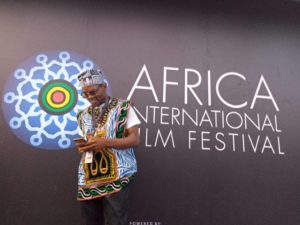 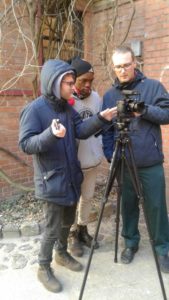 Upcoming Projects for 2022 and beyond

– Since 1972 Theatre performance Show happening in Yaoundé on April 10th (which advocates for peace by teaching young people how they can using nonviolence means aid the end of the crisis)
– Feature Film to be shot this year titled Ann (More details will be coming up in the days ahead)
– A couple of Short films
– And Kanjo Series season 4 shoot.

Challenges faced as a film maker and actor.

Being a young film maker in a developing economy like Cameroon, Randy points out that living in the Northwest Region is hell given the ongoing crisis. “The ongoing crisis in the NW and SW especially because I’m based in the Northwest and I choose to use this platform to add my voice to the thousands of voices already raised to say… #EndtheAnglophonecrisis” he said.

words of encouragements to others?

On how to go about this life and as a way of encouragement, Menkemndi had these few words to put out. “Get people who believe in you and believe In your vision, many people will disappoint you in that process of finding the right people however once it’s God ordained the right people will show up and you will see the results. You can go fast alone but you’ll only go far with a team. People invest in systems and systems are made up of people. Also be Patient, never underestimate the place of time in your journey. E go Only Take Time but e go happen if you stay true and consistent”

How will you describe yourself!

“I will describe myself as a symbol of hope, grace, believe in destiny and proof of the fact that hard work brings success” were his exact words.

Keep up the good work Sir, WE are committed to pen down more about you and your projects.